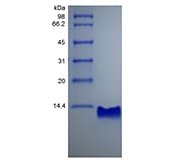 CXCL10 also known as IP-10 is belonging to the CXC chemokine family. It is encoded by the CXCL10 gene, and in rat it is also named the Mob-1 gene. This gene was identified on the basis of differential expression in rat embryo fibroblasts. CXCL10 elicits its effects by binding to the cell surface chemokine receptor CXCR3. CXCL10 has been shown to be a chemoattractant for activated T-lymphocytes and monocytes/macrophages. It also has other roles, such as promotion of T cell adhesion to endothelial cells, and inhibition of bone marrow colony formation and angiogenesis. Rat CXCL10 shares approximately 68 % amino acid sequence identity with human CXCL10.

Fully biologically active when compared to standard. The biological activity determined by a chemotaxis bioassay using human CXCR3 transfected HEK293 cells is in a concentration range of 10-50 ng/ml.

Lyophilized from a 0.2 um filtered concentrated solution in PBS, pH 7.4.

Less than 1 EU/ug of rRtIP-10/CXCL10 as determined by LAL method.

We recommend that this vial be briefly centrifuged prior to opening to bring the contents to the bottom. Reconstitute in sterile distilled water or aqueous buffer containing 0.1 % BSA to a concentration of 0.1-1.0 mg/mL. Stock solutions should be apportioned into working aliquots and stored at ≤ -20 °C. Further dilutions should be made in appropriate buffered solutions.