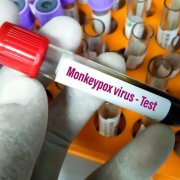 After the Covid-19, the monkeypox virus once again detonated the world. Human monkeypox was first identified in a 9-year-old boy in the Democratic Republic of Congo in 1970 and is prevalent in Africa. Recently, with the continuous increase of non-monkeypox endemic areas and the number of infected people, monkeypox has once again entered the public eye. Scientists from many countries have called on the public not to panic, but to be vigilant against monkeypox and take effective epidemic prevention measures. After obtaining the monkeypox gene sequence, Jiangsu Watson Bio Ltd immediately formulated a monkeypox project development plan, and established a special R&D team to develop monkeypox diagnostic materials to help prevent and control the monkeypox epidemic.

Monkeypox virus (MPV) belongs to the Orthopoxvirus genus and is an enveloped double-stranded DNA virus. MPV can effectively infect human primary monocytes, by inhibiting CD4+ and CD8+ T cell activation, eliminating local T cell responses, avoiding systemic immunosuppression and immune monitoring. The results of gene sequence alignment of monkeypox virus (MPV-ZAI) and variola virus (VAR-IND and VAR-GAR) showed that there were significant differences in the regions encoding virulence and host range factors at the ends of MPV and VAR genomes. The results of phylogenetic tree analysis showed that MPV and VAR were not direct “relatives”. The MPV IFN resistance gene is mutated to encode the IL-1β-binding protein gene, and these sequence differences may lead to reduced MPV pathogenicity and infection rate. However, it is not excluded that MPV will undergo human adaptation through spontaneous or recombination.

Scientists including Sergei N. Shchelkunov of the Russian National Research Center for Virology and Biotechnology “Vectors” sequenced a 197 kb genome of MPV isolated from a patient during a massive monkeypox outbreak in Zaire in 1996. By aligning the genome sequences of MPV with those of the severe disease-causing Indian 1967 strain (VAR-IND) and the relatively mild disease-causing smallpox Garcia-1966 strain (VAR-GAR), it was found that the middle part of the MPV genome encodes essential The nucleotide sequences of enzymes and structural proteins were 96.3% homologous to variola virus (VAR). The regions at the ends of the genome that encode virulence and host-range factors vary considerably. Mutations in two interferon (IFN) resistance genes in MPV and the presence of interleukin-1β (IL-1β) inhibition may contribute to the differences in the properties of these two viruses and may also limit the use of monkeypox as a model of smallpox. Although extensive genetic differences confirm that MPV is not an immediate ‘relative’ of VAR, future adaptations of MPV to humans are not excluded.

In conclusion, the results of the genome comparison of MPV and VAR indicated that there were multiple differences in the virulence genes of MPV with the major and minor strains of VAR. MPV and VAR likely evolved independently of orthopoxvirus ancestors. Genetic differences between VAR and MPV raise considerable questions about the validity of this MPV smallpox model. However, MPV itself causes severe disease, and we need to closely monitor MPV infection rates to ensure that it does not spontaneously or recombine human adaptation in unvaccinated populations with high HIV prevalence.

Note 1: TIRs are indicated by arrows and short tandem terminal repeat regions are indicated by rectangles. Coincident sequences are represented by wide black blocks; deletions of one genome relative to the other are shown as lines. The boundaries of variable genomic regions are marked by the number of nucleotides corresponding to their positions in the genome.